Originally published on robertharrison.ca on March 25, 2019.

On March 5, 2019, I participated in a Salesforce.org ChatBot Hackathon at California State University East Bay. There were participants from all over the Cal State University system, as well as the University of San Diego, which I and a colleague represented. The main objective of the event was to create intents and utterances that could be shared within the Higher-Ed community. The secondary objective was to create a chatbot using Salesforce Einstein. It was great to see the chatbots that all the groups had created. I was really impressed!

Many of the attendees were new to the Salesforce platform and chatbots. Where does one start? In this post I want to talk about the process for creating a chatbot. I won’t go into detail about creating chatbots on Einstein because there are TrailHeads that cover implementation in good detail. Even if you do not use Salesforce Einstein ChatBots, you may find this post useful. I think the general workflow of creating a chatbot is similar on other platforms, including Amazon Alexa and Google Voice.

What is a ChatBot?

A ChatBot is artificially intelligent program that can have a conversation with a person. Most chatbots uses messenger-type apps to communicate with people. A person can type a question and the chatbot replies with an answer.

Give your bot a name to make the user experience more personal.

Define a few personality traits for your bot. Is your bot friendly? Funny? A surfer dude?

Think about how your organization wants to be represented.

The personality traits can help you define the bot’s messages and responses.

Brainstorm some areas of frequently asked questions. In the case of higher-ed, some areas include, Admissions, Financial Aid and Student Life. Pick one area to focus on. Later, you can add more areas.

For one of the areas, brainstorm use cases. Think about different processes in your organization, frequently asked questions, and if a bot could help. For Admissions, for example, a couple of use cases include the qualifications for admission and what standardized tests are required.

Map out the Use Cases

It really helps to visualize the use cases. Use a whiteboard or diagramming software. I like to use diagram.io to map it out. Here is an example: 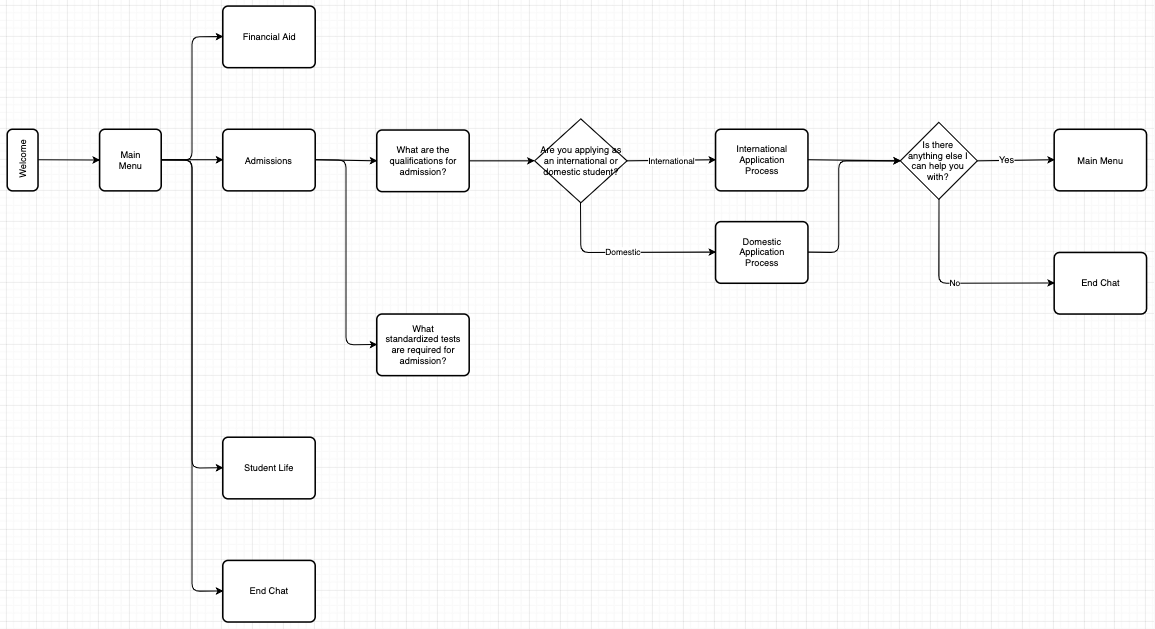 Determine where intents can be used

I’ve updated the diagram to include where the intents would be used:

Define utterances for the intents

Utterances are all the ways a person could say or request an intent. A few examples include:

Defining the utterances is probably the most time consuming task of creating a chat bot. It is well worth the effort, as the more utterances, the better the natural language processing (NLP). Document the utterances in a spreadsheet.

If you will be attending the 2019 Salesforce Higher Ed Summit, in San Diego, be sure to check out a session on chatbots that I will be co-presenting. Look for a session titled, “Unlike Jon Snow, Chat Bot knows a Lot!”